This time we look at the structure of llama antibodies in more detail.

In conventional antibodies, both heavy and light chain form the antigen binding site with amino acids from the second framework region (FR2) interacting with the variable domain of the light chain (VL). (The FR2 lies between the CDR1 and CDR2 regions).

Compared with conventional VH, llama VHHs differ by four amino acids in the FR2; positions (37, 44, 45 and 47; shown in green). In the conventional VHs these FR2 amino acids were conserved during evolution and are involved in forming the hydrophobic interface with the VL. 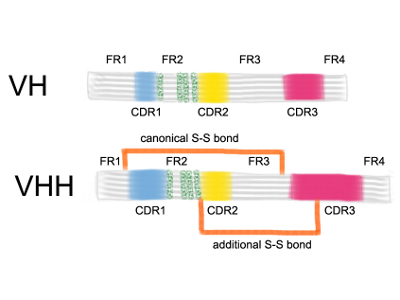 The three complementarity determining regions (CDR1, CDR2 and CDR3) form the antigen-binding paratope. CDR1 and CDR2 have canonical structures and are found in the variable (V) region, whereas CDR3, which has a non-canonical conformation, includes some of the V, all of diversity (D, heavy chain only) and joining (J), and some of the constant (C) regions. The CDR3 in llama antibodies is more variable and longer than in conventional antibodies.

The lack of a light chain and the associated amino acid substitutions in the CDRs does not limit or reduce the diversity of the epitopes or antigen binding. In actual fact the amino acid substitutions and the longer CDR3 might compensate for the lack of the three CDRs carried by VL by increasing the surface size of the paratope. Furthermore, the llama CDR3 is extraordinary as it forms a convex loop extension which can extend into the active sites of antigens (e.g. enzyme active sites). This is in contrast to the flat interaction surface between Fab (VH-VL) of conventional antibody and antigen.

Compared with conventional antibodies, where the interface between VL and VH (for the formation of the binding cleft) is stabilized by hydrophobic residues in the FR2, these residues are hydrophilic and charged in llama VHHs making the VHHs more soluble. The extra-long CDR3 also favors the solubility of VHHs.

Due to the increased hydrophilicity, llama VHHs are conformationally and thermally more stable. Unlike conventional antibodies they are functional at high temperatures (heat shock; 2 hours at 90oC) and refold after heat denaturation. Refolding of llama antibodies is induced after contact interaction between the CDR3 in the unfolded VHH with antigen.

Where conventional antibodies fail to recognize less antigenic sites, VHH can be engineered. Recombinant VHH can be expressed at high levels in prokaryotic (Escherichia coli) and eukaryotic cells (yeast). VHH antibody fragments have been shown to be potent enzyme inhibitors in vitro. The use of VHH to inhibit enzyme activity to bring about immunomodulation is more efficient than using antisense technology.

VHH humanized antibodies are being used to target tumors:

The advantage of VHHs being small allows them to pass across the blood brain barrier with ease, making them an ideal imaging tool for targeting cryptic antigens. Llama VHHs selected by phage display against tumor markers (e.g. EGFRIGF-1R) are being used successfully in cell imaging studies, anti-cancer therapy, and in vivo imaging of tumor tissue.

Llama antibodies have been used against rotavirus in vivo and used to identify caries caused by streptococcus mutans. As VHHs are small and soluble they are rapidly cleared from the kidney. Alternatively, bispecific VHHs can be generated which recognize long-lived serum proteins (e.g. Albumin, PEG), to increase half-life, and the therapeutic target of interest.