To accompany the introduction of our llama antibody production service we will be publishing a series of blog posts focusing exclusively on llama antibodies (VHH). This is the third in the series, and the first 2 blogs are linked to at the end of this post.

Despite the size of the llama antibody being approximately 15kDa, their specificities and affinities are comparable with those of conventional 150 kDa immunoglobulins. In some applications llama antibodies have advantages because of their size. The small size, specificity and high affinity of Llama VHH antibodies allows them to penetrate into areas where antigen targets are obstructed. This makes them particularly useful for delivering targeted drugs into tissues with poor vascularization (e.g. tumors).

Tagging VHH llama antibodies with radioisotopes or toxins would not only provide specific targeting to tumors but its quicker clearance from the system would reduce the damage to healthy tissue. Some therapies (e.g. treatment of rheumatoid arthritis and tumors) would require a prolonged serum half-life providing a longer exposure time to bloodstream targets and reducing the need for frequent dosage. VHHs half-life can be increased by PEGylation, conjugation or fusion to human serum albumin, which itself, has a half life of 19 days.

Llama VHH provide unique and effective opportunities. With differing criteria for specific therapies a wide range of strategies have been developed to improve the pharmacokinetic properties of antibody fragments. Llama VVH can be tailored according to the needs of the application. 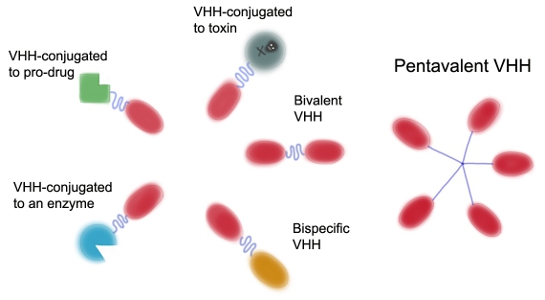 Antibody-directed enzyme pro-drug therapy (ADEPT) for cancers– The most studied VHHs are those with the potential anti-cancer activity. Carcinoembryonic antigen (CEA) is overexpressed in many types of tumors. Using the ADEPT technique, an anti–CEA llama VHH (acts as a transporter) is fused to an enzyme (beta-lactamase), which does not normally occur in our body. Beta-lactamase cleaves a pro-drug (cephalosporin nitrogen mustard) of low toxicity into its toxic form (phenylenediamine mustard), killing tumor cells in its vicinity.

VHHs in the treatment of tumor growth and development – Endoglin is an accessory receptor for TGF-beta involved in prostate cancer cell migration and invasion. VHH binding to endoglin inhibits angiogenesis, so disrupting the growth of vascular microenviroments which infiltrating cancer cells depend on. Integrins can be used as biomarkers for disease progression, playing an important role in cancer prognosis. Binding of VHH to the integrin receptor alpha3beta1 (VLA3) can be used to decrease tumor metastasis, as well as blocking cell-mediated adhesion. VHHs may also be valuable in tumor diagnostic tests, detecting for example, early stages of cancers.

Earlier this year clinical trials using VHHs for the treatment of von Willebrand disease were started. Von Willebrand Factor (VWF) is involved in clot formation by interaction with platelets and clotting factor VIII. Patients with low levels of VWF (vWFD type 2B) experience elongated bleeding times. Other patients may lack the VWF-cleaving enzyme, resulting in large VWF multimer-platelet aggregates, causing thrombotic thromobocytopenic purpura. In both conditions levels of active VWF are low. VHH binding to VWF multimers would prevent plate aggregation and spontaneous clotting. VHH binding to the active form of VWF can be used as a diagnostic tool to determine the levels of VWF in patient serums.

Llama VHHs recognizing the toxin components AahII and AahI of the scorpion Androctonus australis have been produced. Bivalent (two anti-AahI) and bispecific VHHs (anti-AahI and anti-AahII) can neutralize scorpion toxins. Production of VHHs neutralizing antibodies could be preferable to using anti-venoms raised in horses.

Llama antibodies recognizing envelope protein gp120 have also been shown to block HIV infection. These VHHs also compete with soluble CD4 (sCD4) and anti-CD4 antibodies for binding to recombinant gp120. Anti-envelope VHH might be useful in defining neutralizing and non-neutralizing epitopes on HIV-1 envelope proteins. This has implications for vaccine design.

VHHs have also been generated which recognize the capsid protein of hepatitis B. Neutralising antibodies against the conserved M2 ion channel of Influenza A is thought to offer broad protection against the virus. VHH binding to M2 as well as to influenza A virion inhibited viral replication.

Parasite infections by protozoas such as trypanosomiasis are difficult to treat with antibodies due to a dense surface hypervariable and immunodominant epitopes. Llama VHHs are small enough to access conserved and less immunogenic epitopes hidden deeper under the surface. VHH linked to beta-lactamase trypaolysis can be induced by a VHH-beta–lactamase fusion activating a pro-drug. A possible therapy for sleeping sickness.