Who made the first antibody?

The word “antibody” is as highly recognizable as it is misunderstood. Those that make a living in the biotechnology field, biological sciences, and research have a firm grasp on antibodies (in general and in specifics) while others may ask “what is an antibody?” With such a general question begs many specific and formal answers that may lead to seemingly never-ending discussions on immunity, antigens, and sub-unit chains forming a Y shape. Furthermore, mono-clonals vs poly-clonals and heavy vs light chains can provide a level of detail that can send any non-biological mind in a tailspin. A good starting point when discussing antibodies or explaining their unique role in biological research is to start at the very beginning: with the first antibody. 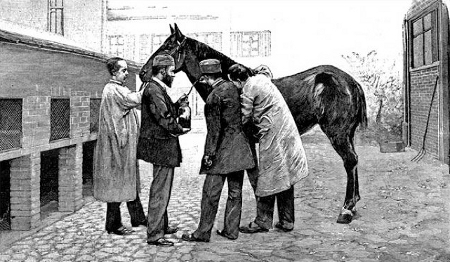 The very first antibody was discovered in 1890 by a pair of (soon to be known as) immunologists. Emil von Behring (pictured above and to the right) along with Kitasato Shibasaburo discovered what was later termed antibody while researching Serum Therapy. Von Behring and Shibasaburo came across a “neutralizing substance” in blood that seemed to counter-act infection by Corynebacterium diphtheriae. Diptheria is a highly contagious bacterial infection of the upper respiratory tract that is spread in the air or by direct contract from affected individuals to healthy ones. In their work with diphtheria, the pair discovered that when they transferred blood serum from immunized animals to animals that were suffering from diphtheria, the sick animals were cured. 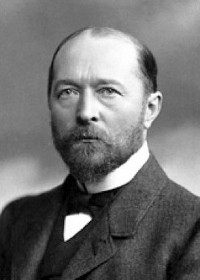 There was something in the serum of immunized animals that was enabling sick individuals to heal themselves and combat the bacterial infection. For his work in discovering the existence of this “neutralizing substance”, Behring was awarded the very first Nobel prize in Physiology and Medicine. Nobel himself cited “for his work on serum therapy, especially its application against diphtheria, by which he has opened a new road in the domain of medical science and thereby placed in the hands of the physician a victorious weapon against illness and death.” Furthermore credited with the invention of the field of immunology, Emil von Behring along with Kitasato Shibasaburo and other scientists down the road were able to finally identify action and function of toxins and anti-toxins.

Along with von Behring, Robert Koch helped to continue research at the Institute of Hygiene on infectious diseases. Together (along with Emile Roux and Alexander Yersin), they were able to show that the toxin itself could be isolated from the filtrates of the diphtheria bacteria. While the toxin was able to cause disease, graduated doses of sterilized diphtheria (with no toxins) when injected into animals caused them to make a substance in their blood that could destroy the toxin itself. After this discovery of graduated immunization, the mystery substance was termed an “antibody” while the substance responsible for the production of the antibody was termed “antigen”.